Not long ago, mark weir’s pumptrack video has been published. Of course, directly some “experts” were discussing in forums about the video that it must be a fake.

But in fact the idea of the pumptrack is not as new as it seems. In fact we had pushraces on the BMX-racetrack, years ago. Of course you got a launching tower from where you started, but if you got over the first hurdle you could easily hold speed constantly.

I can remember watching Christoph Leveque as he combined several dirtlines at the legendary sheep hills without pedalling. So he could punctiliously drive in a circle.

For laymen it’s firstly curious that you can ride at relative high speed without pedalling. But you understand that this is not a perpetual motion machine at the latest after 3 rounds, or 30 seconds, as your tongue is reaching the ground.

Anyway, it was clear for us to build such a pumptrack and that as “pronto” as possible! The only question was “where”? The answer came after thinking a long time about this. At the bottom of our dirtjumps there was a small virgin forest. Not long after activating the gang to clean a lane, everybody was satisfied by standing in the middle of the sun flushed forest which shall be the location for many new bike adventures.

While the gourmets where discussing about the best BBQ area, the best trackline generated in the heads of the creatives. Over there a few whoops, over there a ground loop, maybe a little jump, perhaps a tree house so we could live hear. Finally you got all you need for living. A Burger King is right next to our spot! In other words the euphoria was huge. Simply, because a pumptrack was a complete new thing for us.

Fired by this euphoria, the first rounds could been driven already on the next day’s evening! Actually unbelievable if you consider how long you work on a single dirtlanding. Already after a few days doing fine-tuning the first timed round records were established. We were rarely laughing as much as on this day. The pressure by the time measurement causes sometimes losing control and often it was straight the way into the botany.

Caused by the pumptrack enthusiasm, suddenly there were started some modifications on the bikes. Deep, wide bars were mounted, light CC-Tires an light tubes were attached and the forks has been driven at 6,5 cm to bring down the balance point so that you avoid that the front wheel is rearing up while doing speed manuals over the bumps. It even got so far that Frank Vilgertshofer, Alias “BK”, drove only with tachometer on his dirtbike. Readings resulted that a topspeed of 35km/h is possible. And during one day there were 20km driven, or in other words 300 rounds.

The highlight of the battle of material was reached as Frank Heinrich aka Mr. Leafcycles designed a special pumptrack frame and brought it out on the market in a small series. According built-on was the 10,8 kg bike, the highlight on every pumptrack-session. You actually didn’t want to change back on your own bike. 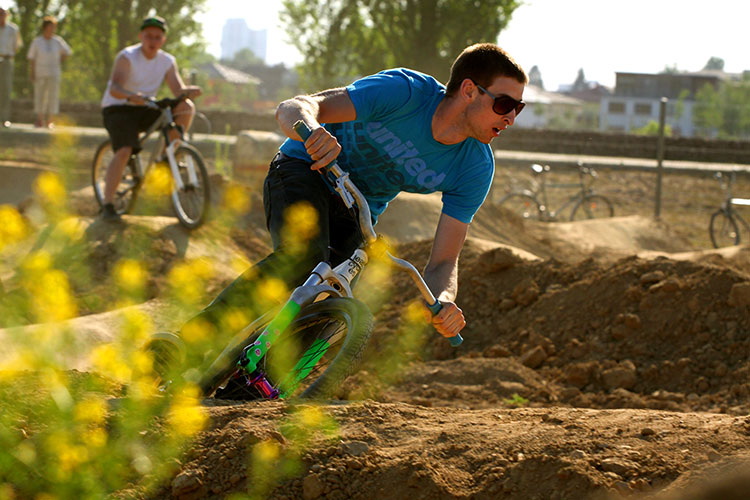 The fact that such a track has a small grade of determent causes that many people started again to ride and even to build up the track. People which were thought to had given up riding completely years ago. The pumptrack was there and suddenly our scene experienced some convivial gatherings. Our dirttrails needn’t hiding and actually it was business in summer to ride them from dusk till dawn, but since the day the pumptrack was built, everything changed.

For young firebrands it’s surely the greatest to do spins around all axes while flying over dirtjumps. But if you reached the tender age of 30+, you’re quite thankful for having fun on the bike without hanging headfirst in the air. But don’t fool us self, there have never been as so much falls as this season on the pumptrack. While being in speed rush you’re on a small grade of control, especially when you’re to lazy to build the track wider than 40 cm. But the falls are mostly not bad.

And if nobody was riding, plans for modifications and adds were produced. Because of the small hurdles the erosion is kept small. You don’t need so much time for repairs and so you have more time for riding. And the best thing: usually you can use the track at the same day. So some new lines were formed during time. And during the annoying winter break the one or the other thought was wasted in new modifications. One things sure already, the coming summer season will be fast. 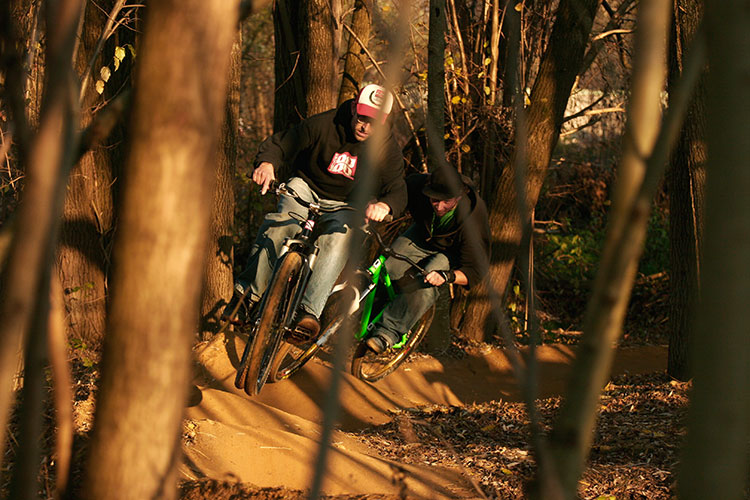